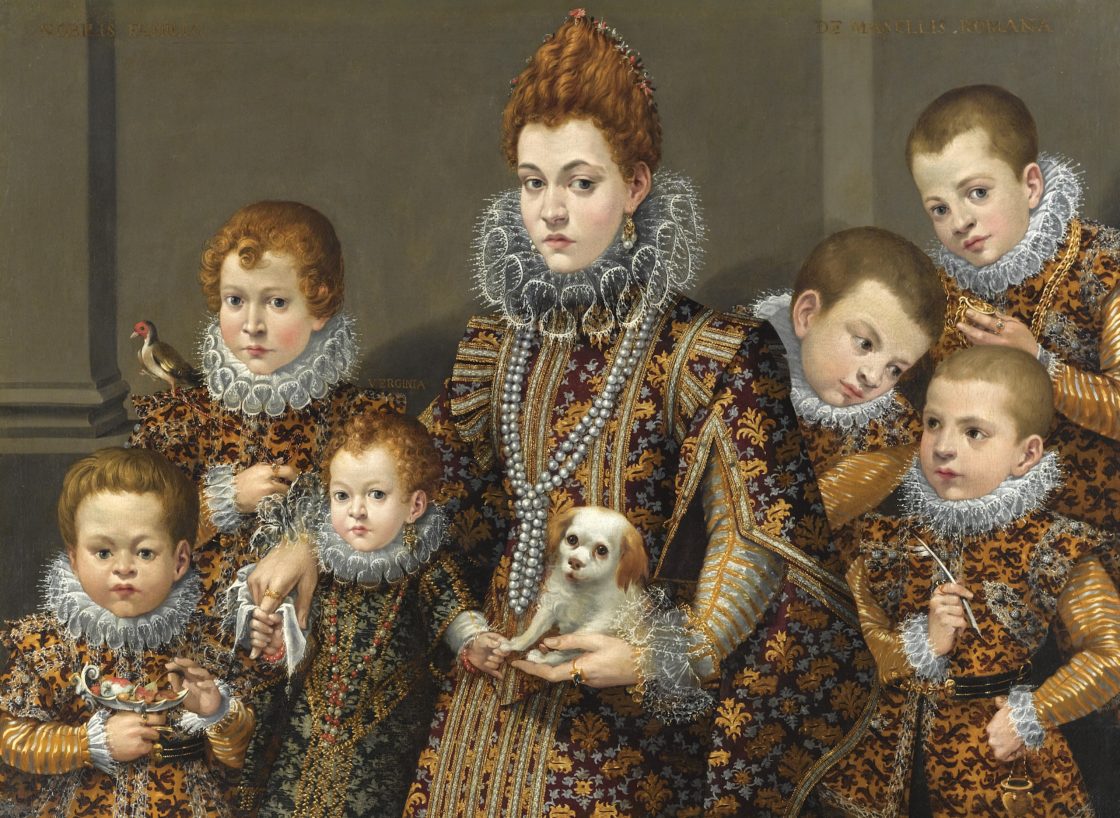 ABOUT THE ARTWORK:
PORTRAIT OF BIANCA DEGLI UTILI MASELLI AND SIX OF HER CHILDREN

This direct and intimate family portrait was painted by Lavinia Fontana in Rome at the very beginning of the 17th century. It is one of her finest portraits and one of the few works known from this period of her career.

Bianca degli Utili was a noblewoman of Florentine origin, married to the Roman Cavalier Pierino Maselli, and died in September 1605 at the age of 37 after giving birth to her nineteenth child.

The portrait is remarkable for its meticulous attention to the detail of the different hairstyles, including Bianca’s floral hairband, the embroidered costumes and for the wide range of textures shown. The five boys wear outfits made from the same rich material while mother and daughter wear different dresses. All, however, wear clothes which makes use of quite pronounced dark and light fabrics and patterns. Mother and daughter also stand out from the boys by the elaborate jewellery they wear in the gold earrings and the pearls around their necks. While the cuffs of all the clothes differ slightly, all wear very similar sumptuous ruffs and particular attention has been paid to depicting the play of light and shadow on these.

The mater familias is holding a lap dog in her left hand, her right hand around the youngest daughter who in turn is holding the dog’s paw with one hand and mother’s forefinger with the other.

Every child is defined by a small object be it a bird, a small platter of sweets a medallion, or a quill and ink pot.

ABOUT THE ARTIST:
lavinia fontana

Lavinia Fontana (August 24, 1552 – August 11, 1614) was a Bolognese Mannerist painter active in Bologna and Rome. She is best known for her successful portraiture, but also worked in the genres of mythology and religious painting. She was trained by her father Prospero Fontana who was a teacher at the School of Bologna. She is regarded as one of the first female career artist in Western Europe as she relied on commissions for her income. Her family relied on her career as a painter, and her husband served as her agent and raised their 11 children. She was perhaps the first woman artist to paint female nudes, but this is a topic of controversy among art historians.

Fontana and her family moved to Rome in 1603 at the invitation of Pope Clement VIII. She gained the patronage of the Buoncompagni, of which Pope Gregory XIII was a member. She was subsequently appointed as Portraitist in Ordinary at the Vatican.

There are over 100 works that are documented, but only 32 signed and dated works are known today. There are 25 more that can be attributed to her, making hers one of the largest oeuvre for any female artist prior to 1700. Some of her portraits were once wrongly attributed to her contemporary Guido Reni.

Lavinia’s mythology paintings which feature nude figures are being increasingly studied by art historians. Roman gods such as Minerva, Mars, and Venus are depicted in various forms of undress in these paintings. There is little or no basis for other contemporary women artists depicting nude figures in such a way. It has been said that Fontana’s work with mythology painting represents possibly the first female artist involvement in the genre. She was a very successful artist who was well commissioned and was able to financially profit from her  art. She is a rare example of a woman able to obtain such high levels of success in art during the Renaissance period.