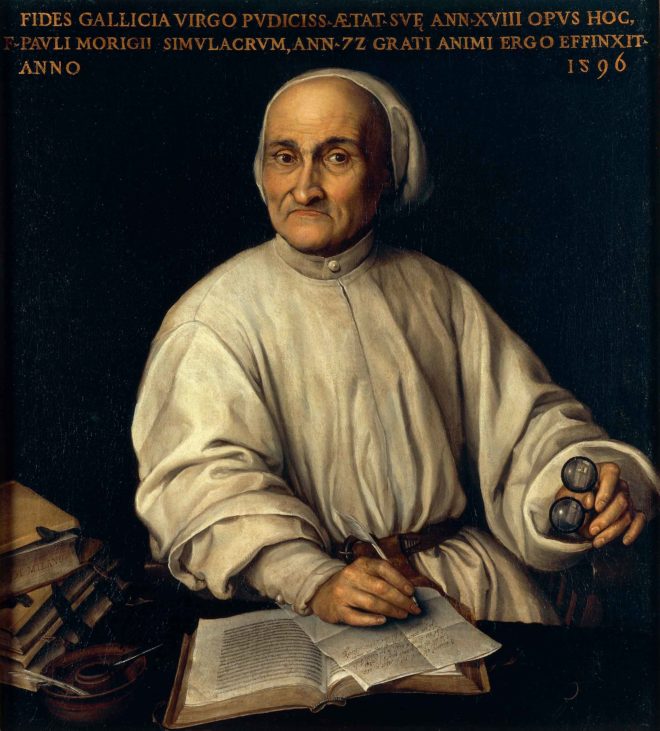 about the artwork :
PORTRAIT OF PAOLO MORIGIA

This portrait of Paolo Morigia, made by Fede Galizia around 1592-95, of the superior general of the Jesuates (the Apostolic Clerics of Saint Jerome), is remarkable for the artist’s technical skills and was much praised by the sitter himself, who said it was a perfect likeness: “it bears such a resemblance to nature that for more one could not ask”. The emphasis here is not so much on the religious aspect of Morigia as on him as an erudite historian and it is worth noting that he is holding a pair of glasses in his right hand. The meticulously naturalistic rendering of the objects reminds us that Fede Galizia was also a painter of still lifes. The paper the friar is writing on bears verses by Borgogni, which refer to the painting and to the artist’s painting skills.

One of the most amazing fact of this painting is that she began painting this portrait at the age of fourteen.

ABOUT THE ARTIST:
fede galizia

Fede Galizia was born in Milan around 1578. Her father, Nunzio Galizia, also a painter of miniatures, had moved to Milan from Trento. Fede learned to paint from him. At a young age (teen age), Galizia was already an established portrait painter handling many commissioned works. Her father may have been inspired to train his daughter by the example of Sofonisba Anguissola, who was from Cremona, around 50 miles from Milan. Perhaps it was her father’s influence as a miniaturist that led to Galizia’s attention to detail in her portraits. Her treatment of jewels and clothing made her a very desirable portrait painter. She was often commissioned to paint religious and secular themes as well. She also created miniatures and altarpieces for convents. Sixty-three works have been catalogued as hers, of which 44 are still lifes. Yet, it is unknown the number of paintings Galizia executed. Many works that could have possibly been hers have been attributed to her male counterpart Panfilo Nuvolone, who drew significant inspiration from Galizia. Her paintings were not given the recognition they deserved until well into the 20th century, when special attention was given to her work in studies made in 1963 and 1989.

Galizia never married or had any children, instead leaving her life items to a cousin, Anna Galizia and a nephew, Carlo Henrico. On June 21, 1630, she made her will and is thought to have died of the plague in Milan shortly afterward, at age 52.