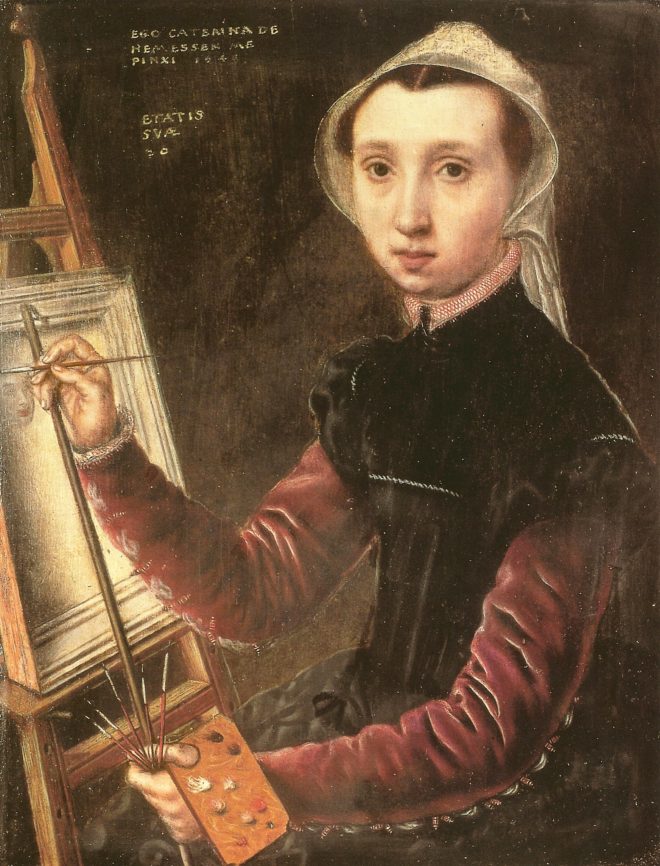 ABOUT THE ARTWORK:
SELFPORTRAIT

This painting, made by Caterina Van Hemessen in 1548, is likely the first self-portrayal of an artist, male or female, at work at the easel. This selfportrait shows Catharina in the early stages of one of her portrait painting.

At first glance, it’s the slightly unsettling, unrequited stare of the prim sitter, gazing past us to a mirror that sits somewhere outside the frame, that piques our attention. That her plush velvet sleeves are at odds with the grubby task at hand – smudging pigment and oil on a sloppy palette – adds to the curious sense of staging. It isn’t long before our eyes are pulled deeper into the painting’s mystery by the teasing inscription that Hemessen has inserted. In the murky void between the larger likeness of herself that dominates the right half of the image and the smaller self-portrait that the painter-within-the-painting has begun to create on the primed oak panel that rests on the easel on the left, it reads: “Ego Caterina de Hemessen me pinxi 1548 Etatis suae 20” (or “I, Caterina of the Hemessens, painted me in 1548 at the age of 20”.). With this caption, Hemessen’s portrait presumes the existence of three distinct selves, the actual painter, the painted painter, and the yet-to-be-painted.

Interesting facts about the artist

Clara Peeters (active 1607–1621) was a Flemish still-life painter from Antwerp who worked in both the Spanish Netherlands and Dutch Republic. She is the earliest female Flemish painter for whom there is verifiable extant work. Peeters is the best-known female Flemish artist of this era and one of the few women artists working professionally in seventeenth-century Europe, despite restrictions on women’s access to artistic training and membership in guilds. She is mainly known for a series of small scale female portraits completed between the late 1540s and early 1550s and a few religious compositions. Van Hemessen is often given the distinction of creating the first self-portrait of an artist (of either gender) depicted seated at an easel.