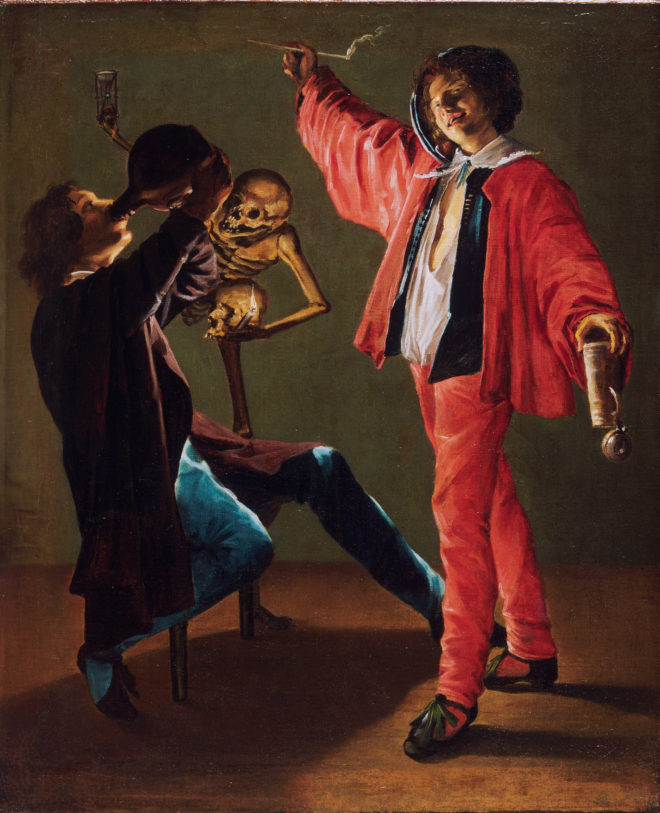 about the artwork :
THE LAST DROP

The Last Drop is a c. 1639 oil painting by Judith Leyster in the John G. Johnson collection of the Philadelphia Museum of Art.It was regarded as a work by Frans Hals until 1903, when it was noticed that it is signed ‘JL*’ on the tankard.

One underlying meaning for this art piece focuses on the loss of self-respect, the dissipated state of drunkenness. Both men appear to be unconcerned about the actions they are committing despite the skeleton standing in their presence. The skeleton’s facial expression and stance show that it is enjoying itself just as much as the drunken men. Skeletons were familiar figures in seventeenth-century art, representing the unavoidable nature of death.

The figures of the two men appear to be similar to the figures in the scene of the Merry Trio, also painted by Judith Leyster in 1629. The Last Drop represents the later stage of a party after drinking has continued. It is now dark and then men are blinded by the effects of drink. The night scene is represented by the use of the candle between the men and the skeleton. According to Hofrichter, the scene shows a common vanitas theme with an inverted tankard and a smoking pipe to show that the party is over. The skeleton holds up an hourglass to emphasize that time is running out on the party, but also on the lives of those present.

ABOUT THE ARTIST:
JUDITH LEYSTER

Judith Jans Leyster (also Leijster; baptised July 28, 1609 – February 10, 1660) was a Dutch Golden Age painter. She painted genre works, portraits and still lifes. Although her work was highly regarded by her contemporaries, Leyster and her work became almost forgotten after her death. Her entire oeuvre was attributed to Frans Hals or to her husband, Jan Miense Molenaer, until 1893. It wasn’t until the late 19th century that she was recognized for her artistic abilities.

Leyster was born in Haarlem (Netherlands) the eighth child of Jan Willemsz Leyster, a local brewer and clothmaker. The details of her training are uncertain but some scholars speculate that Leyster pursued a career in painting to help support her family after her father’s bankruptcy. She may have learned painting from Frans Pietersz de Grebber, who was running a respected workshop in Haarlem in the 1620s. During this time her family moved to the province of Utrecht, and she may have come into contact with some of the Utrecht Caravaggisti.

Her first known signed work is dated 1629. By 1633, she was a member of the Haarlem Guild of St. Luke and might have been the very first women registered by the guild. She specialized in portrait-like genre scenes, typically of one to three figures, who generally exude good cheer and are shown against a plain background. Many are children; others men with drink or playing music. Leyster was particularly innovative in her domestic genre scenes.