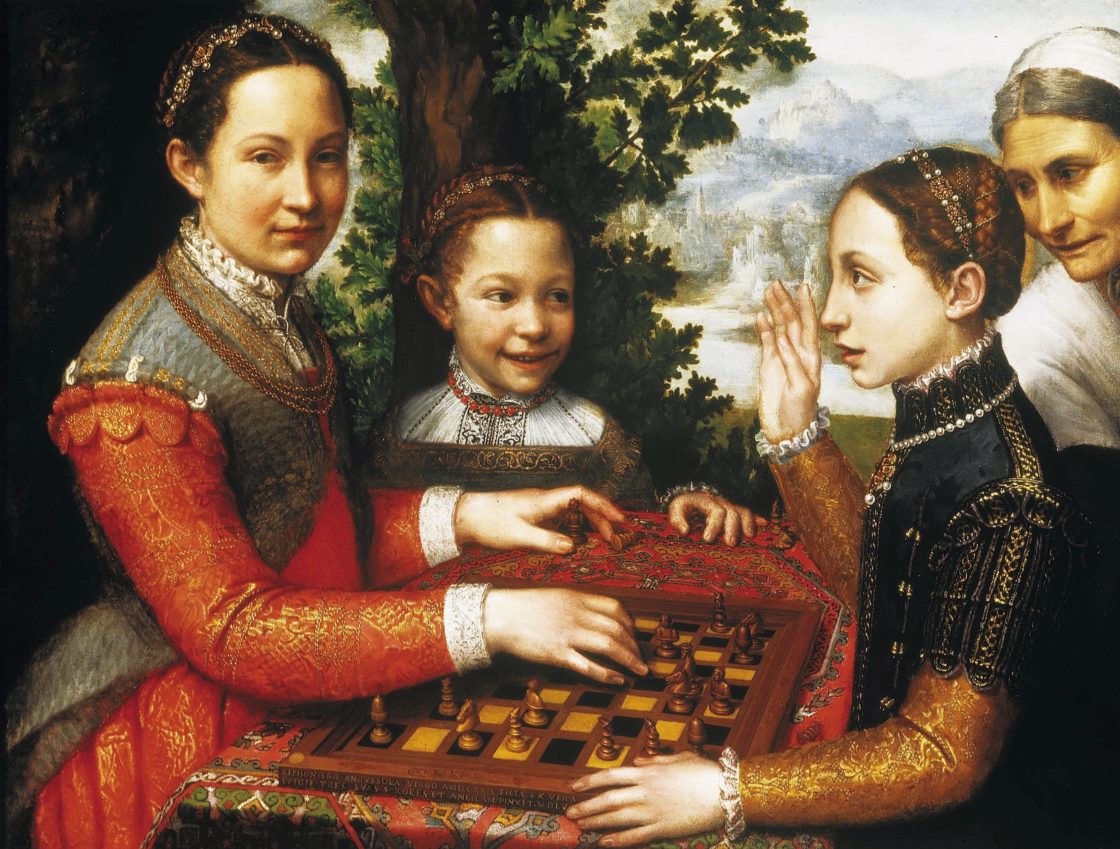 about the artwork :
the game of chess

This painting is probably the most recognizable of Sofonisba Anguissola’s work. We have a genre scene, a glimpse into the intimacy of Sofonisba’ household, into the intimacy of women and girls in 16th century Italy. In the foreground we see three girls/women, the artist’s sisters, playing chess, and in the background, on the right and cut off, certainly the servant, the maid of the Anguissola family, watching the girls play.

On the left we have Elena, who is calmly looking at the viewer, while her hand gives us the information that she is beating her sister at the game, sitting in front of her, on the right of the painting. On the right, we have Minerva, her hand raised, who is not fooled and understands that the game is lost. Her mouth is slightly ajar, as if she is talking, saying something to her sister who has just won. And finally, in the middle, the youngest sister, Europa, who is standing close to Elena and is wearing a big smile in the direction of Minerva, perhaps to mock her.

Sofonisba brings out the social rank of her family through the magnificence of the clothes and the finesse of the jewelry and details.

Depicting her sisters in the middle of a chess game is not a random choice. Chess evokes social rank, self-control as well, and by painting her sisters playing chess, Sofonisba is also painting the siblings’ advanced education. The painting is also based on a very sophisticated composition: the three sisters have an eloquent gesture, their looks are full of mischief, we feel almost movement in this painting. Sofonisba offers us here a genre scene, certainly, but also a landscape! We find it in the background, we see nature with the tree and the leaves, what looks like a mountainous landscape, maybe even a lake below. To this, we must also add that if we look closely at the four women in this painting, we can almost deduce that the artist wanted to paint the human face at different ages of life, with the child, the teenager, the young woman, and the older woman. And if we take the whole, the mixture of genres, the colors, the texture of the clothes as well as the various expressions of the faces, we say to ourselves that Sofonisba Anguissola wanted to show us all the extent of her talent with only one work. And it is successful.

ABOUT THE ARTIST:
SOFONISBA ANGUISSOLA

Sofonisba Anguissola (c. 1532 – 16 November 1625) was an Italian Renaissance painter born in Cremona to a relatively poor noble family. She received a well-rounded education that included the fine arts, and her apprenticeship with local painters set a precedent for women to be accepted as students of art.

As a young woman, Anguissola traveled to Rome where she was introduced to Michelangelo, who immediately recognized her talent, and to Milan, where she painted the Duke of Alba. The Spanish queen, Elizabeth of Valois, was a keen amateur painter and in 1559 Anguissola was recruited to go to Madrid as her tutor, with the rank of lady-in-waiting. She later became an official court painter to the king, Philip II, and adapted her style to the more formal requirements of official portraits for the Spanish court. After the queen’s death, Philip helped arrange an aristocratic marriage for her. She moved to Sicily, and later Pisa and Genoa, where she continued to practice as a leading portrait painter.

Later in her life and after years of painting state portraits,  she painted religious subjects, although many of her religious paintings have been lost. In 1625, she died at age 93 in Palermo.